One of the great things about computers is their ability to take tabular data and turn them into pictures that are easier to interpret. I'm always amazed when given the opportunity to show data as a picture, more people don't jump at the chance.

One thing I find a bit disconcerting is:

Perhaps the issue here is that the author didn't know how to best visualize the data to make his story, but I'm going to help him out.

If we start from the underlying premise that not all officiating crews call games in the same way, we want to see in what ways they differ.

The data below is a reproduction of the table from the article:

The author points out:

The author goes on to talk about his interview with Mike Pereira (who happens to be ~~pimping~~ promoting his new book).

While the table above is helpful it's not an image that you can look at and ask, "Man, what the heck is going on?" There is a visceral aspect to it that says, something is wrong here ... but I can't really be sure about what it is.

Let's sum up the defensive penalties (Defensive Offsides, Encroachment, and Neutral Zone Infractions) and see what the table looks like:

Now we can see what might actually be going on, but it's still a bit hard for those visual people. If we take this data and then generate a scatter plot we might have a picture to show us the issue. Something like this: 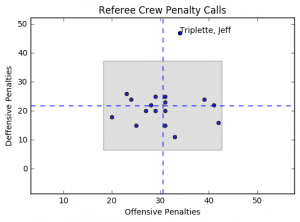 Notice anything? Yeah, me too. Jeff Triplette's crew is so far out of range for defensive penalties it's like they're watching a different game, or reading from a different play book.

What I'd really like to be able to do is this same analysis but on a game by game basis. I don't think this would really change the way that Jeff Triplette and his crew call games, but it may point out some other inconsistencies that are worth exploring.

Code for this project can be found on my GitHub Repo